I am a professional flutist based in Vienna and I enjoy conveying my love of music through different genres, styles and woodwind instruments from all over the world.

It is a joy to introduce traditional half forgotten instruments on an international stage and to inspire and bring new knowledge to my audience.

My video playing Slovak folk instruments, Fujara and Koncovka, went viral soon after its publication, garnering over a million views in a short period....

I also work as a flexible classical musician, regularly invited to play and tour with prominent ensembles and conductors such as the Wiener Volksoper Orchester, the Vienna Chamber Orchestra, and the late Ennio Morricone.

I have a passion for recording, bringing a new energy to numerous film scores and soundtracks (for ex., Netflix, Sony and BBC) both as a solo and orchestral musician.

Due to the Covid-19 situation, I built a new home studio where I work as a remote session musician and teach my students.


I was born in 1990 in Bratislava (Slovakia). Since I remember there was always music at our home. We sang and were listening to all different genres of music - from Dubliners through Deep Purple to peruvian and african music. I started to play my first instrument, which was an irish tin whistle, at the age of seven. I played by ear with my father in different bands and groups.

At the age of thirteen I attended a music school to learn the flute and to read sheet music.That introduced me to the world of classical music and I went to study at the conservatory of music in Bratislava with an amazing flute teacher: Mgr. Marta Braunsteinerova.

Afterwards I continued my studies at the university of music and performing arts in Vienna with great professors such as Hansgeorg Schmeiser, Robert Wolf, Rudolf Gindlhumer and Birgit Ramsl, where I got a deeper understanding of classical music and all necessary techniques required to play the flute at the highest possible level. I finished my studies in 2018.

In the last few years I rediscovered my love for all different genres of music and world woodwind instruments through the fujara, shakuhachi, dizi, bansuri or duduk just to name a few.

I am happy that I could work and make music with many renowned orchestras and ensembles such as Janoska ensemble and Tonkünstler orchestra in 2019, where I featured the solo fujara with orchestra and with the Radio Symphony Orchestra in Vienna, where I performed solo tin whistle in the music of Lord of the Rings and Avatar in “Hollywood in Vienna” at Konzerthaus Wien.

I regularly record soundtracks for movies and series such as Klaus, Over the moon, His dark materials, Vanda Vision The Bad Ass Librarians of Timbuktu and many more at the Synchronstage Vienna. Since the pandemic started I have built a small home studio where I continue to record music with all my instruments.

I was lucky to be able to play many concerts as a first solo flute on tours with maestro Ennio Morricone in the biggest stadiums in Europe.

It is a pleasure to live in Vienna, with its rich culture and history, and regularly perform in orchestras such as the Volksoper Wien or Vienna Chamber Orchestra to name but a few. During my studies I became a member of the summer academy of the Vienna Philharmonic and played at the Salzburger Festspiele.


I also have a passion for contemporary and minimal music. As a member of Cluster Ensemble I played a on their debut album "CLUSTER ENSEMBLE PLAYS PHILIP GLASS" (2016) and Philip Glass himself released it on his own label OMM - Orange mountain music - followed by a tour with this ensemble to New York.

I am regularly recording at Synchronstage studio in Vienna, where I participate at film scores for Hollywood movies, Netflix, BBC, Sony amongst others.

I am very passionate about teaching and sharing my knowledge and joy of music-making with others. Everyone should be able to make music. 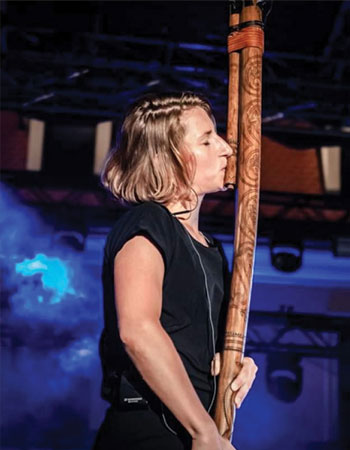 Visit this page to check out my latest videos and photos from concerts and studios to find out more about my music, flutes and different ethnic woodwind instruments.